Hugh Hendry (Hedge fund manager of Eclectica fund) recently released his April commentary which you will find below. (Thanks ValueWalk)

Mr. Hendry has been less visible recently so it is nice to hear his most recent thoughts.  As always he provides some thought provoking ideas and historical analogs to our current situation.  It will be very interesting to see if his ideas and predictions are correct.  Like the name of his fund, his view are 'eclectic'.

Will we run out of storage for Natural Gas?

The price of natural gas has been falling throughout 2012 and is making multi year lows.  You have to go a long way back to find sub $2 natural gas and considering the price of oil is near nominal highs this is unusual.  (Yes I know there's not of much a substitution effect between NatGas and Oil but work with me here.)


So what's driving this drop in gas prices? Some of it can be attributed to a warmer winter but the development of shale gas and fracking technology has opened up whole new geographic areas which were previously thought to be uneconomic to drill for natural gas and oil. (EIA article on the topic) This has increased production (sorry, but peak natural gas has not occurred yet)

This additional production has increased inventories and driven down prices. How much is impressive when you look at long term natural gas inventory figures. 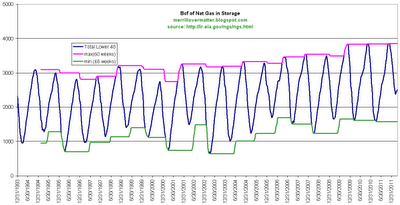 It appears inventory bottomed around March 9, 2012 at 2369 Bcf (Billion cubic feet) where the recent seasonal minimum is around 1600 Bcf. Over the entire data series natural gas has never bottomed with so much already in storage.  This has hit prices. Hard.

One would presume that with spot prices so low, production would be curtailed and bring the supply and demand back into balance. This may not happen fast enough.  Even with very low spot prices production is still higher than last year. Couple this with already higher than average inventory numbers inventory and you have falling spot prices.


Could we run out of storage for natural gas before the winter drawdown?  It's going to be a race between declining production (if any) compared to already bloated inventory figures.  I quantify the challenge below.  Each yearly line shows the injection rate needed to fill inventories to capacity each year. Consider it a "glide path" of how much you'd need to produce each day until the peak inventory day (around the middle of November) The injection rates are not linear throughout the year but comparing the curves is instructive. As one can see in 2012 the hurdle is very low.


Right now the injection rate for 2012 can be ~33% lower than previous years to completely fill up inventory by the middle of November. 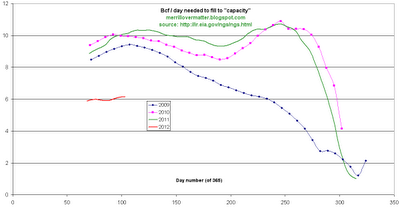 IF you see the 2012 line continue to drop as time progresses and remain well underneath the 2009 line storage may very will fill up.  We have another 200 or so days to go; I'll be updating you over the summer.

Pipelines and oil - Canadian crude will get out


Obama may feel the need to stop this project for political purposes but all he will succeed in doing is building more pipelines in Canada going east and west and sending that oil to Asia.


Kinder Morgan Canada said yesterday it would extend an open season as it seeks firm commitments from shippers for an expansion to its Trans Mountain pipeline to Canada’s West Coast. The Canadian arm of Dallas-based Kinder Morgan aims to double capacity on the Pacific-bound line, from 300,000 to 600,000 barrels per day. Among other products, the $3.8-billion expansion would carry additional volumes of oil sands to a port at Burnaby, British Columbia, for export to Asia-Pacific markets and the West Coast of the United States.

The expanded oil production in Canada and the Midwest is creating a localized glut of oil and various companies are capitalizing on this price differential.

While there are quality differences between these two benchmarks one can see how the spread has widened recently.

Regardless of the decision on the Keystone pipeline, Canadian oil will (eventually) get out to the worldwide marketplace.

Additional reading:
http://www.albertaoilmagazine.com/2012/04/u-s-pipeline-constraints-weigh-on-canadian-crude-prices/
Posted by Greg Merrill at 8:18 AM No comments:

Before you panic about the employment report -- Some context

The monthly employment report was released today and while the economy continues to add jobs the report did not meet expectations.  (As of writing this on Friday afternoon SP500 futures were down 1+% while long term bond futures were up +1.3%)

Here's a longer term chart of the year over year percentage change of total employment as reported by the government and ADP. (ADP is in red)

Employment is still growing but the rate of growth is looking like it may top in the near future.  If in the next couple of months you see these metrics really roll over then I'll be hitting the REAL panic button but right now the slow grind upwards still appears valid.

That being said I'm not suggesting you go out and buy stocks.  If America slows down from our already tepid growth as Europe falls back into recession and China continues to slow the world could be in some serious trouble. (All in all I'm not too enthused about equities right now as they have already had a huge run from late last year.)

Just please keep this chart in mind if the markets are down on Monday and the financial press is in a lather about it all.
Posted by Greg Merrill at 3:41 PM No comments: