I recently highlighted the rise in Spanish and Italian government bonds yields. Today they are shooting higher yet again and I'm certain this is a contributing factor to the equity market's weakness, US budgetary problems notwithstanding.

I usually don't mention my trading activity but I sold off an equity ETF position Friday due to this European contagion situation.
Posted by Greg Merrill at 11:22 AM 1 comment:

The challenge of Google+ and entering my circle of trust

I recently signed up for Google+ and in typical Google style its somewhat spartan in style and instruction on how to use it.  I'm slowly stumbling around trying to figure the system out.

There are some improvements over Facebook in my opinion, most specifically the 'circle' system where you can place individuals in multiple different groups so as to filter and direct your comments, pictures and information to specific groups.

Even if Google+ is 'superior', will it eventually exceed Facebook in popularity?  Not necessarily.  Part of the challenge Google+ faces is the size of their network is MUCH smaller than Facebook's (which is currently over 750 million people!) Network size is very critical as a social network with very few 'nodes' provides a much lower utility even if it's 'better'  [See Metcalfe's law]  Google+'s strategy of slowly rolling out the system via invites from current members mitigates this problem as people are automatically creating more connected 'nodes' in the network instead of random additions you don't personally know.

Right now my plan is to use Google+ as a social media outpost/gateway for my twitter and virtual friends versus Facebook for my 'in the flesh'  friends.  It will be curious to see how the two competing social media platforms evolve.


Many thanks to downtown Josh Brown for being the first person to put me in one of his circles.  Hopefully I'm not in the deranged fanboy category but in the circle of trust...

Posted by Greg Merrill at 3:08 PM No comments:

Nearly a month ago I mentioned rising yields in Spain possibly causing problems.  I underestimated the number of countries. Both Italy and Spain's treasury yields have spiked higher. 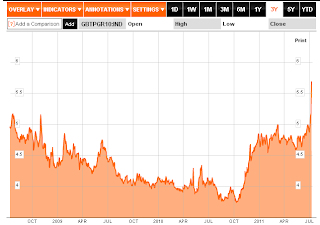 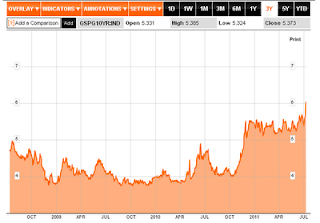 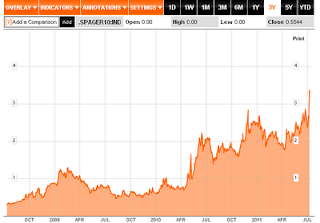 None of the charts are pretty.  While Italy was getting most of the headlines for the rate of yield increase please note how Spain's yields are higher.  Any EU country bordering the Mediterranean is having serious problems right now.
Posted by Greg Merrill at 3:46 PM 2 comments:

North Korea watch -- look out for some sabre rattling?

North Korea is rumored to have recently closed all universities and put the students to work:
From North Korea Econ Watch

The reports said the students would be put to work on construction projects in major cities and on other works in a bid to rebuild the economy. This could indicate that the country’s food crisis and economic problems are worse than previously thought.

Combined with reports of additional EU aid it appears the speculation of severe stress in the Hermit Kingdom appear to be correct.
From the Guardian

The European commission is to give €10m (£9m) in urgent food aid to North Koreans on the brink of starvation, after negotiating for "unprecedented access" to ensure that the food goes straight to those most in need.

With North Korea on the ropes I wouldn't be surprised to see some sabre rattling and more than your usual number of threats and provocations in the near future.  South Korea recently winning the 2018 Winter Olympics bid provides North Korean a new 'delicate' target to threaten as well.
Posted by Greg Merrill at 8:38 AM No comments:

Economics for the post MTV Generation -- It's the debt stupid

I previously mentioned an entertaining video regarding the competing economic theories of Keynes and Hayek.  Here is round two, and while its a few months old it deserves attention.

When watching the video pay close attention to the assistants to each boxer, you may recognize some other names as well as what appears to be Chairman Ben Bernanke in the first row of the meeting.

While the debate over monetary and fiscal stimulus continues (most recently as the wrangling over the federal debt limit) I'd like to repeat a graph I've shown before. 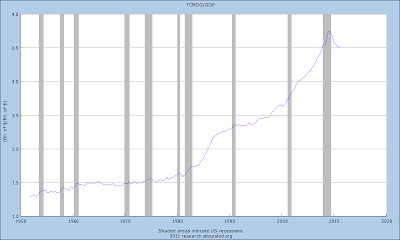 Total US debt (private, corp, government) to GDP rose for this entire data series until the great financial crisis of 2008.  Since then its been dropping and this is one reason our recovery has felt so sluggish as corporations and individuals continue to delever.


for virtually the entire period beginning in late 1929 and continuing right through the Great Depression and into the 1950s, the yield curve was resolutely positive. And yet that period coincided with the two worst downturns in the last 100 years, as well as three other recessions.

Until the private sector deleverages monetary policy levers will be less effective. I have suspicions as to how Mr. Bernanke will 'fix' this problem but I'll leave that to a later post with evidence.

So what explains the current crisis and malaise? I think Steve Keen is on to something.  I strongly suggest you watch this video and examine his theories.

edit: sorry about the autoplay. Hit the pause button to stop it.

Here's some recent news from a few hedge fund managers:

A short video from Hugh Hendry (thanks Creditwritedowns)

Some notes from Jim Chanos' presentation at the Vail value conference. (thanks Katsenelson) Provides more detail on Chanos' bearish position in China.  Note Chanos is a short seller so he is always bearish on something.
Posted by Greg Merrill at 12:42 PM No comments: