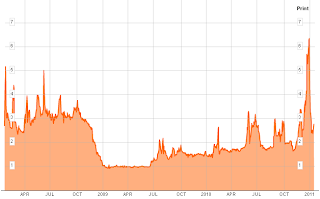 China recently raised the bank reserve ratio requirement again and it looks like this time it's really starting to bite. 7 day repo rates (what banks charge each other for a 7 day loan) spiked up just before year end but they aren't falling back down as I had alluded to in my previous post.

As you can see from the 7 day repo rate chart the spikes have been getting larger at the end of each quarter, hinting at banks scrambling to find enough cash for their books at quarter close.  While the rate has dropped  in the 7 day, the 3 month has u-turned and is going back up near its pre-12/31 closings.  The Chinese stock market has been going down recently and this removal of cash from the system may be the reason.  If one continues to observe high bank repo rates it does not bode well for the Chinese stock market or the whole commodity/reflation/Australia trade in general.
Posted by Greg Merrill at 11:01 AM No comments:

Some stuff I've been reading / watching

http://www.creditwritedowns.com/2011/01/cautiously-optimistic-into-2011.html
Address says it all.

http://blogs.telegraph.co.uk/finance/ambroseevans-pritchard/100009218/the-dam-breaks-in-portugal/
Has Portugal already asked for IMF help and no-one noticed?  Would be ironic if this episode of Euroland bailout occurs quietly.   Long term the trend is NOT Portugal's friend:
http://www.bloomberg.com/apps/quote?ticker=GSPT10YR:IND
(Look at the 5 year history)
Posted by Greg Merrill at 1:03 PM No comments: 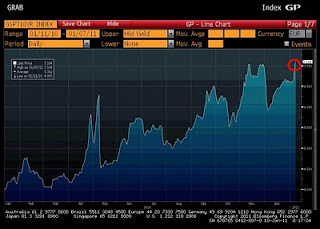