For those of you who happen to follow the markets every day, the last few sessions have been extremely odd.  I have some non equity concurrent indicators I follow and they suddenly stopped working about 3 sessions ago.  I don't day trade so I haven't been whipsawed in my personal or clients' accounts, but the action in the market has taken on a different tone in the last few days.

Today the market was up nearly 1+% and then down nearly 1+% within an hour and in the currency markets the dollar is stronger against most major currencies.  Here's some pretty pictures to show what I mean.  For the Canadian dollar and Yen, up is a stronger dollar.  For the Euro and Australian Dollar, down is a stronger dollar.  (Look at the fraction symbol and you'll figure it out)

These are all hourly charts from freestockcharts.com

Canadian dollar has been in an downtrend for a few days.

Euro getting whacked today?  It also just moved through the 200 hour moving average.

Like the Canadian dollar, the Yen has been weakening for several days.

These are only hourly charts but it does show 'something happening' and a possible change in direction for the dollar.  Will the dollar actually change direction or is this all one big head fake to sucker in the dollar bulls?

Don't know but get out your popcorn and watch the show.

Posted by Greg Merrill at 10:22 AM No comments:

I was reading this article from Sober Look blog a few weeks ago and thought I'd investigate further into the ability to switch fuels from coal, natural gas and oil for electricity generation.  To quote:


Fuel switching is actually quite common at power plants, the biggest users of natural gas. Many modern power plants can switch between gas and fuel oil, and many can switch to coal as well.

In fact cheap natural gas has created an oversupply of coal as well.

I perused the Energy Information Adminstrations web site and found some confirmational data.


Additional data can be found at the EIA website showing total electricity production as well as products consumed. 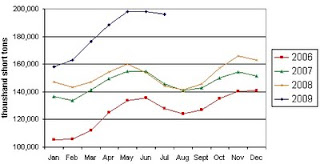 Electricity production from coal is down and as you can see from the chart, coal inventories are up. (EIA source)

I understood the possibility of fuel switching from a petroleum based product to natural gas, but had always assumed natural gas has always been cheaper to run than petroleum.  So why run petroleum at all?  I'm concluding the petroleum only power plants are older, more expensive and only run when electricity demands outstrips supply from cheaper sources such as coal, natural gas, nuclear, etc.

This is where the mindset of contstant growth can trip you up.  Total electricity production in the US is down so far for 2009.  In that situation, the first power plants to be shut down would be the most expensive, the oil based power systems.

When electricity demand returns and the less expensive natural gas and coal based power generators are running at full capacity, only then will more expensive additional oil generators will be turned on.

http://www.eia.doe.gov/cneaf/electricity/epm/epm_sum.html
Posted by Greg Merrill at 12:14 PM No comments:

Who is buying all the Treasury debt? a.k.a how bankers are bad traders 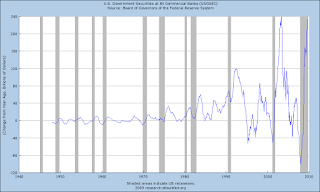 Like a worldwide version of Where's Waldo,  a lot of people want to know who is buying all the US Treasury debt being produced by a yawning budget deficit and when they will conversly dump them on the open market.  The Chinese and the Federal Reserve are the first people on everyone's list, but here's another.

Presented is US Government Securities at all commerical banks.  The first graph shows the absolute change year over years, in billions of dollars.  As you can see US banks have added nearly 240 billion dollars to their portfolios in the last 12 months.   Unfortunately this has not absorbed the entire supply of new issuance in the last 12 months, but it takes a serious chunk of the notes out of circulation.  As this data series is released weekly, I'll be watching it closely to see if the bankers are buying more US debt in the near future. 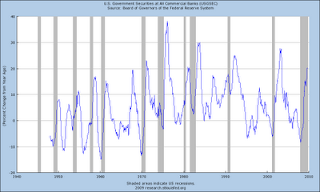 Here is the data in a slightly different format so recent events do not dominate the picture, it shows government debt holdings on a year over year percentage basis.  What struck me about this graph is how the banks seem to be adept at raising their treasury holdings as the recessions appear to be ending as shown by the gray vertical shaded areas.

The bankers appear to consistently purchase US debt just as the recession is finally ending (remember the recession 'end' is backwards looking and it can take several months before a recession is declared as over) and from a trading perspective at exactly the antipodal time to reduce credit risk. 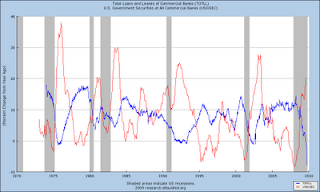 Hey, look at that.... Inverse correlation between (US debt) and (loans and leases) on banks books!  It appears the bankers are still running scared and loading up on US treasuries.  Also, look at how loans are declining on a year over year basis, something that has not happened over the entire time period in this graph.  Corporations can access credit via other means (commercial paper, debt markets, etc) but the decline in bank lending  is troublesome.

Posted by Greg Merrill at 4:58 PM No comments:

Email ThisBlogThis!Share to TwitterShare to FacebookShare to Pinterest
Labels: banks, charts and graphs, us debt

It's a busy Hugh Hendry day.  Here's some video interviews from this morning.

Hugh Hendry on Chinese Yuan (CNBC, 2009 October 16)  - China doesn't and or can't free the yuan from the dollar and how this creates stress on Europe and Japan.  Lower dollar values are improving China's trade position.


Some very different perspectives.
Posted by Greg Merrill at 11:47 AM No comments:

The graph is of  year over year percentage change to reduce seasonal fluctuations.

CPI for all urban consumer in blue

Posted by Greg Merrill at 2:57 PM No comments:

I have a small short position in Harley Davidson (HOG) and their 3rd quarter earnings were released today.

The headline numbers were predictable, 3rd quarter sales down 21.3% year over year, earnings down due to numerous write offs.  Stock opens lower.  So far so good for my short position.

From their press release:

The Company is narrowing its guidance for full-year 2009 shipments, and now expects to ship 222,000 to 227,000 Harley-Davidson motorcycles to dealers, including 35,000 to 40,000 during the fourth quarter. The Company continues to expect full-year gross margins to be between 30.5 percent and 31.5 percent.


So lets split the difference and say they are going to ship 37,500 motorcycles in the 4th quarter 2009.   In 4th quarter 2008 they shipped 80,476 units.  Harley Davidson is telling us right now shipments (and thus motorcycle revenue) will be more than 50%  lower for the fourth quarter.


I'm not disparaging the brand or the company.  They are in a tough business right now; selling a 20,000 dollar completely discretionary product.  Harley Davidson was very clear about their plans to reduce production in the 4th quarter and how their credit write offs continue to increase. I have to give the company credit for their presentations, but the data does not look good.

As I have previously posted, the FHA (Federal Housing Administration)  is making loans that are rapidly going bad.


TraderMark provides some additional detail and of course colorful description of the current political and economic situation regading falling home prices and the government's attempt to prop them up.

The graphic at right shows rising default rates for FHA loans made recently as compared to a couple of years ago.  Please read the article, but here's a few juicy bits.

Posted by Greg Merrill at 1:36 PM No comments:

Do you really trust the statistics coming out of China?

Watching the periphery and seeing what is going into and out of China mitigates any 'massaging' by the Chinese abacus crunchers.

Since China imports quite a bit of iron ore, observing their monthly trade flows on this important basic commodity can provide a peek into what is going on in the Middle Kingdom.

Bloomberg - Chinese ore imports shows their importation of iron ore.  You can see the large recent spike in imports.  The increase is above trendline over the past several years.

h/t to MacroMan
Posted by Greg Merrill at 10:26 AM No comments:

Consumer credit outstanding results are not pretty.  Outstanding consumer credit continues falling with neither the first nor second derivative being positive.  As I have mentioned before the rate of decline is unprecidented.   It was World War II the last time consumer credit fell at such a rate and WWII is a pretty good excuse not to go out and borrow more money.  As you can see from the picture (click on it for a larger image) consumer credit before has fallen to a negative growth rate, but only for a short period of time and it quickly turned upwards.

Since the US consumer is  approximately 70% of US GDP this does not bode well for growth in the near term.

Oil inventory levels continue to rise on a year over year and absolute basis.  Considering the seasonality of energy usage I added a graph showing the year over year % change.

Numerous factors are keeping oil prices up (weak dollar, tension in the Gulf, predictions of a recovering world economy, oncoming winter, etc.) but the higher inventory levels rise the harder it becomes for oil prices to remain elevated.

Posted by Greg Merrill at 10:39 AM No comments:

Email ThisBlogThis!Share to TwitterShare to FacebookShare to Pinterest
Labels: charts and graphs, oil 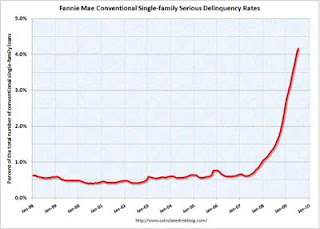 I was going to work up a nice graph and some commentary regarding mortgage delinquencies, but Calculated Risk beat me to it.  A picture is worth a 1000 words and the graph tells an ugly story.

Unfortunately the data it describes is millions of people losing their homes and it is getting worse.  It can be hard to remain analytical when you think about that.  Maybe that is another reason to call economics the dismal science?
Posted by Greg Merrill at 10:02 AM No comments: