The recent employment report has been a great point of contention between the bulls, bears, and the black helicopter crowd. I won't rehash the report but there's something I mentioned in a previous posting about employment seasonality that caught my attention.

The beginning of a new year brings a large number of layoffs as seasonal workers for the holiday shopping rush are released.  As you can see from this first graph the non seasonally adjusted data and adjusted data vary greatly right now.
The difference is rather obvious to see but lets transform the data a bit and look at the difference between the normalized and raw data. 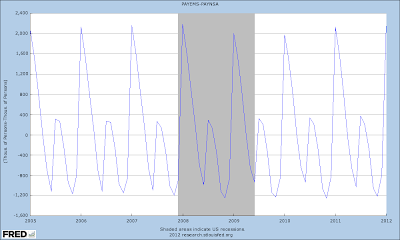 Subtracting one from the other exposes just how much the raw data can vary from the the adjusted data in an attempt to smooth out the seasonality of the data.  As can be seen we are at the peak of this delta and it will most likely be revised in the future due to the fact we are that noisiest point in the data collection period.  Will it be revised up or down? I haven't a clue, but I'm going to watch it and report to you how much these data series change over time.  Stay tuned.
Posted by Greg Merrill at 8:18 AM 1 comment:

A housing update -- at best a flat market

Over the last few years during conversations with clients I've frequently been asked my opinion about the housing market and whether now is a good time to buy.  Home prices are naturally a point of conversation as they are a large part of most people's net worth and the loss of equity is preventing some people from moving up or refinancing.  So the question of whether we are at the bottom of home prices is an important one.  Unfortunately I don't think we are at the absolute bottom of home prices and we will most likely continue to see a slow decline in prices in the near future.  My non-prediction for 2012 is we will not see a rebound in home prices; at best we'll see a flat to slightly down market.

Home prices have strong local factors so this conversation is about national trends, your local market will vary.


Mortgage loan balance still declining
There are several headwinds the housing market needs to overcome before it is fully healed. This chart shows the change in mortgage values outstanding since 1975 (Source: Federal Reserve) Looking at loan balances to predict home prices may seem counter intuitive but remember a rising total national loan balance means there are more buyers (and borrowers) entering the market.  Some interesting aspects of this chart are how even during other previous recessions (shown in gray) the value of outstanding mortgages continued to rise on a year over year basis; until our most recent recession in 2008/2009.  This was the first time during this entire data series when the total value of all mortgages outstanding declined on a year over year basis. One would not be engaging in hyperbole to call our current decline in home prices exceptional.

An overhang of foreclosed homes
While it appears the primary wave of home foreclosures is past us there still is a large backlog of homes in the foreclosure process. Until this backlog is completely cleared and returns to more 'normal' levels, the amount of housing coming on the market by 3rd parties (not the person who currently lives/owns the home) will put downward pressure on prices. 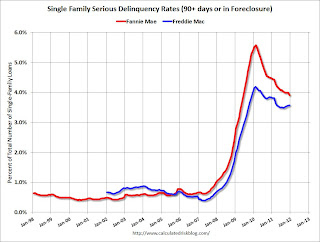 Single family delinquency rate (Source: CalculatedRisk)
Another negative factor is the hidden inventory of homes out there from people who want to move up or out but are waiting until home prices stabilize before putting the place on the market. I personally know of a few people who are accidental landlords and are hoping and waiting until prices stabilize before putting their rentals on the market.  While this is purely anecdotal I'm sure its not just a local or isolated phenomenon.

Renting versus Owning coming into balance
Fortunately there are some positive factors which should mitigate a continued decline in home prices.  Home prices and mortgage rates have declined to the point where a mortgage now equal to rent.

As you can see for a very long time it was cheaper to rent versus own. We are approaching a point where this may invert and owning a home would be cheaper than renting. There are other upkeep and time costs associated with home ownership (as a homeowner I can assure you there are many!) but the primary costs are approaching parity.
Clearing the excess inventory
The number of unsold homes is beginning to stabilize as a percentage of US population.  The hidden inventory is of course hard to measure but at least we are getting closer to 'normal' for this data series

The long decline in construction spending does appear to be finally over which will help the building trade and stop being a drag on overall GDP growth.

Even though the housing market decline appears to be slowing forecasting when we finally reach bottom is not something I'm willing to predict right now. I believe the worst of the declines are behind us so if you are looking for a home now would be a good time to start looking but be picky and drive a hard bargain! There is going to be lots of supply coming on the market over the next few years.

One aspect of the crushing decline in home prices is it has popped the speculative mindset so very prevalent in American thinking a few years ago. (I'll admit to falling a little under that spell myself)  Take your time and find a house to live in, not one for profit.