China and the threat of 'dumping Treasuries'

A recent Wikileaks article has exposed the Chinese mentioning their large holdings of US Treasuries while in conversation with the US as a not so subtle hint to back off on various international activites by the US, specifically selling arms to Taiwan.
From AFP (2011, Feb 21)


China's clout -- gleaned from its nearly $900 billion stack of US debt -- has been widely commented on in the United States, but sensitive cables show just how much influence Beijing has and how keen Washington is to address its rival's concerns. An October 2008 cable, released by WikiLeaks, showed a senior Chinese official linking questions about much-needed Chinese investment to sensitive military sales to Taiwan.
"In that regard, the recent announcement that the United States intends to sell another arms package to Taiwan increases the difficulty the Chinese government faces in explaining any supporting policies to the Chinese public."
His comments came days after the Pentagon notified Congress it was poised to sell $6.5 billion worth of arms to China's arch rival Taiwan.

China's massive holdings of US debt have not escaped the public's notice either.  Even Saturday Night Live spoofed the relationship. (email readers may need to click through to see the video)


My response to China:
Bring It.
I dare you.
I double dog dare you.


One must ask how the Chinese have amassed such a huge wad of our currency and thus our debt when considering my dare to the Chinese. In short, the Chinese forcibly keep their currency undervalued by constantly intervening in the exchange markets.  They are doing so to keep their exports 'cheap' and their export factories busy.  They need invest all those US dollars in something so they end up in our Treasury bonds and bills.  Their huge holdings of our debt is a direct result of their mercantilist trade policies.

If the Chinese do not want to keep buying our debt the can very easily do so by not intervening in the currency markets, but I doubt they will do so in a dramatic fashion. Their low skill low wage factories cannot compete without an under priced currency.  The Chinese are slowly raising the Yuan but it is a challenge for them to wean themselves off the Faustian bargain they created.

Paul Tudor Jones of Tudor investments dedicates 14 pages to a discussion as to how the undervalued Chinese Yuan has created severe imbalances worldwide.  I suggest you read the whole letter  Mr. Jones' letter (2011 Feb 14)

Failure to address this issue - as one of the primary causes of the intractable unemployment currently plaguing the US -- has led to a series of second-best policy options . . . Indirectly, the peg has exacerbated the United States' large fiscal deficit while enabling our elected officials to delay the difficult spending adjustments that are inevitable.

So China, yes, you can threaten to stop buying our Tbonds.  We would pay a little more for our home mortgages but it would also staunch the flow of manufacturing jobs out of America.  You however would see a massive number of people thrown into unemployment and most likely a repeat of Tiananmen Square.

Here's a documentary on North Korea's propaganda machine and the people trained to fill it.  Remember the kids you see are some of the elite.  Unfortunately  I doubt the current wave of revolutions will break the bulkheads on this repressive country.

There are small scale operations attempting to tell the citizens of North Korea what really going on but I doubt it will amount to much at this level of intensity.

This weekend has been an eventful one for the world geopolitically and this week will see further events which shape the stage.  The riots in Libya and continued unrest throughout the Middle East had a dramatic affect on futures markets today as the regular markets were closed.

The events in Libya are obviously in flux and getting hard news out of the country is difficult so the rumors and actual news will be mixed together and hard to clarify.

The affect on the markets today (Monday) was dramatic:

While the rioting is getting the headlines the trouble in the Eurozone continues its slow burn. Ireland is holding elections this week and the party currently in power is predicted to be handily spanked in the polls.  The mood in Ireland is not good and there is some talk of repudiating the guarantee of the government honoring all senior bank.
Meanwhile Portugal debt continues to drop in price. The 10 year is at 7.45% tonight 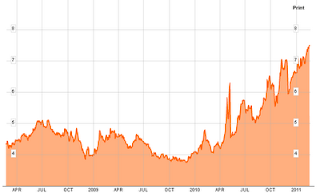 This cannot go on forever.  The recent German elections sent a clear message that Germans are tired of paying for other people's problems.
Tomorrows markets will be very interesting to watch. Oil prices are getting to a point where they are seriously hitting the consumer's pocketbook and another spike in oil (like the one in 2008) could seriously stress the already weak US consumer.  I'm not evening mentioning China and their continued raising of interest rates / reserve ratios.  That's for another time.
Further reading:
High oil prices hit US consumer:
http://bonddad.blogspot.com/2011/02/gas-prices-are-beginning-to-choke-off.html
Posted by Greg Merrill at 3:19 PM No comments: 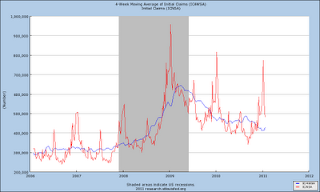 Initial unemployment claims data came out today and weekly unemployment claims decreased to 415,000.  The number has bounced around quite a bit recently causing some gyrations in the market and I thought it would be instructive to dig down a little further into the data.
One item to note from this first graph is how volatile the raw data is.  Note how around year end the unemployment claims spike up dramatically. Compare the raw data to the 4 week moving average seasonally adjusted data and you can understand why the claims data has bounced around so much recently; we are in the post holiday layoff period. 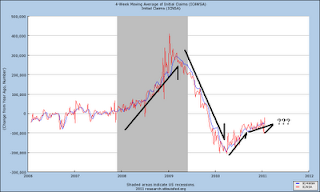 Next let us examine the year over year change in initial claims. What is actually impressive to me is how close the raw data and 4 week seasonal data track each other.   (Note these two graphs do not show today's data)  I have drawn in some black lines showing the rise starting in 2008, a peak in early March 2009 and then a bottom and rebound in early 2010.  Note this is the change in claims and as you can see we are still dropping on a year over year basis but the rapid fall in initial claims has ended and we are trending back towards zero. You can also see the most recent raw claims data is bouncing around quite a bit, again due to seasonal affects and possibly the weather.
Is the glass half empty or half full?
We can torture the data a bit further and just for fun and see what models predict will happen next. Using March 27, 2010 as the baseline (the peak in the rate of decline in initial claims)  I let excel extrapolate the data out another 15 weeks.  Bottom line is you can come up with either a positive or negative prediction depending upon how may polynomials you use. 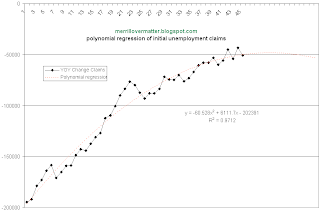 Using a 2 polynomial regression predicts (R2 of .9712) claims are near their deceleration point and will then continue to keep dropping over time.
You want a bearish case? No problem!  Using a 5 polynomial  (R2 of .9763) regression initial unemployment claims will eventually reverse their fall in 12 weeks or so and start to rise on a year over year basis 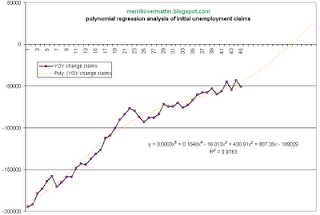 Please note I'm not making economic predictions here, I'm just looking at the shape of a graph.  Going forward we have several cross currents pulling claims in opposite directions.  ISM data has been quite positive which may bode well for fewer layoffs in the future.  On the negative side we have higher food and energy prices as well as continues austerity by the states and municipalities.  As always stay tuned and I'll keep you informed.

Posted by Greg Merrill at 2:54 PM No comments: