Sino Forest even ripped off the scam

As more information comes to light regarding accusations of Sino-Forest fraud it appears even their technique was stolen from someone else:


The brochure said the company would develop the land for agro-forestry farms and after expiry of the plan period, trees and cash crops would be cut and money from the sale would be guaranteed by post-dated cheques.... The Income Tax Department sniffed out a trail of bribes the company had paid buying real estate. The department says it has evidence that the palms of the registering authorities were greased while purchasing land at Jharmari for Chandigarh Extension 22 Project.

I should do a forensic study to see if the income statement and balance sheet could have alerted people to the possible fraud. A rogues gallery of failures / frauds could me most instructive.

Posted by Greg Merrill at 3:52 PM No comments:

Greece and Ireland are not the only European problems.

While Greece is dominating the news (again) there are other rumblings in Euroland you should be watching.  Below is the spread between German and Spanish 10 year yields.  The trend is not going the right way. 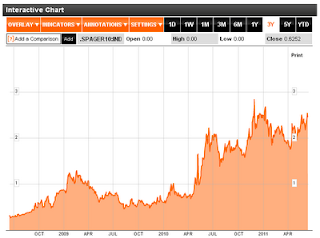 Furthermore yesterday Spanish 10 year yields went up on a 'risk off' day.  No longer does the market consider the government debt of Spain a safe haven when the equity and other risk markets go down.  I'm closely watching the relative and absolute levels of  Spanish debt  As the Greece situation develops keep an eye on this to see if the panic spreads to Spain.
Posted by Greg Merrill at 5:32 AM No comments:

Housing update -- Build it and they will come?

Does supply lead demand or the other way round? 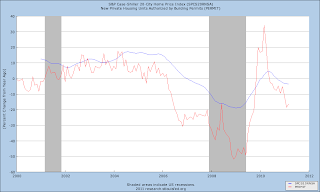 Email ThisBlogThis!Share to TwitterShare to FacebookShare to Pinterest
Labels: housing

Some stuff I've been reading:

Saudi's ready to pump more oil after OPEC disagreements.  Could get interesting if Saudi Arabia decides to burn the other OPEC nations and pump all out.  They have done this before to let everyone know who's boss.
If you are looking for a good historical book regarding oil and politics I'd suggest
The Prize: The Epic Quest for Oil, Money & Power

US structural problems remain -- We are not out of the woods. It is going to take a while.

One reason for high yield falloff ? -- The Fed is selling into an illiquid market it appears, driving down prices.

I know, cheery stuff! Here's some good news:
Industrial jobs coming back to America? -- China's inflation and a declining dollar may help induce an improvement in domestic production. This macro idea has been something I've been considering for a while.
Posted by Greg Merrill at 2:30 PM No comments:

The April monthly report for the Ecletica Fund managed by Hugh Hendry recently escaped to the internet and as usual Mr. Hendry weaves disparate topics into his commentary.

I was reading something recently about the Nobel Prize winner Richard Feynman that made me think that money management was perhaps similar to physics in that you advance by accepting absurdities. The history of physics, he claimed, is one of unbelievable ideas proving to be true. "Our imagination is stretched to the utmost not, as in fiction, to imagine things which are not really there, but just to comprehend those which are".

This one comment really struck me as I have a scientific degree and the idea of the absurd eventually becoming accepted wisdom rings true with me.  While studying various bodies of scientific knowledge it's always interesting to see how sometimes the observational data was not yet supported by theory (and thus absurd) while at other times it was the chalkboard crowd who's absurd theories were dismissed as impossible until observational data caught up to the theory.

Unfortunately the intellectual framework of truth is truth, I just can't prove it yet can get you into serious trouble in the markets.  There's your opinion, the truth, and the market.   I have had to struggle at times with the experience of my opinion of a securities' worth varying from the market's opinion, and even worse diverging in opposite directions.  Remember, you can be right and still lose money.

edit: Sorry but my source for this had his Scribd account closed.  I'm looking for another copy out there in internetland.

edit 2: Found another copy of the report, here it is:
http://www.offshore-rebates.com/pdf/TEF.pdf


ht TheTailchaser
Posted by Greg Merrill at 8:29 AM No comments:

Here's some weekend reading/listening for you.  I really should do this more often so you can see what I'm looking at:

Saudi Arabia going ahead with building 16 nukes:  Even after Fukushima they have decided to go ahead.

Why didn't Fukushima #2 (Daini) meltdown as well?  Very interesting ideas as to why the second power plant complex did not have the problems #1 (Daiichi) experienced.  It may be merely luck and location or it may be the newer powerplant designs.

Carmen Reinhart discusses financial repression in developed economies.  If you think short term rates will rise shortly I think you are wrong.  Financial repression is a broad term but a clear example is keeping short term interest rates below inflation (a negative real rate) This slowly inflates away the debt problem.  Will America and Western Europe be able to pull it off?

China's debt writeoffs are just the beginning -- The opera of excessive credit growth and very lax underwriting standards is starting to get to the good part.
Posted by Greg Merrill at 2:00 PM No comments: