Peering into China via trade statistics

Getting accurate information on China is a challenge. While its hard to prove they are making their numbers up I don't put much credence in many official statistics released from the Glorious Workers Paradise. (WSJ June 2011, Reuters December 2010)

Fortunately there are other ways of observing China, from their borders specifically.  Trade statistics between the Middle Kingdom and the US is actually reported and available from US sources.  The story they tell show of slowing trade between the countries in both directions.

While the graph above is smoothed and lagged quite a bit one can see both China and the US's decline in 2008/09 and China's massive resurgence in 2009 and the US a few months later.

Right now the story is also one of declining growth of trade in both directions.

Of course trade partners may and will shift their vendors around from country to country so this data should be looked at with some large error bars on the data, but this slowdown is something to keep an eye on as a coincident/lagging indicator of each countries economic trajectory.
Posted by Greg Merrill at 11:50 AM No comments:

While the economy has been recovering nicely from the Great Recession there are some interesting divergences which are popping up with this recovery.  One of them which has been discussed elsewhere in the blogosphere (sorry no links) is the apparent divergence between fuel usage and economic activity.

The Ceridian Index reports monthly on diesel fuel used by the trucking industry.   Unlike retail sales which continues upwards the Ceridian fuel index is now declining on a year over year basis. From their most recent report you can see the decline.

One can see in the next chart the apparent divergence between retail sales and diesel usage.

The researchers at Ceridian note the divergence as well and have a possible solution  Unlike the rest of the economy which is improving on a year over year basis, the housing market remains stuck in the duldroms and is still sputtering along the bottom. (See page 6 in the above linked report)

While productivity improvements are also possible I find it unlikely the rate of improvement would be enough to create the entire divergence.  Perhaps the lack of a growing home market and improved fuel usage (or the continued virtualization of our economy) are enough to close the gap between retail sales growth and flat fuel usage.  Only time and further research will tell.  Regardless this indicator bears watching.

In my last post I promised to look at how employment data is being revised over time. On Friday the latest employment data was released and previous data was revised upwards in both the seasonal and non-seasonal data series. While this graph below shows data from just last months revision I may start showing multiple threads to see how the revisions change over time once we have more data. 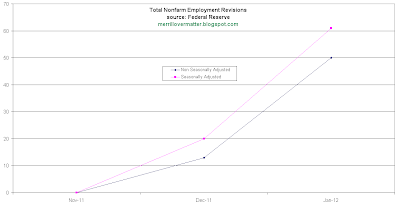 I know, not much data to look at yet. Hopefully we'll see something interesting as time progresses.
Posted by Greg Merrill at 2:24 PM No comments: