Weekly initial unemployment claims were released today and they showed an increase to 399,000, countering the recent downward trend.  Details can be found at the DOL

I would not make much of the current gyrations, up and down. As the graph below shows, right now we are at the highest seasonal peak of layoffs/firings.  Each year you can see a massive increase in initial claims just around the new year. This makes estimating the trend very difficult.  (Translation, put very large error bars on data around the new year) 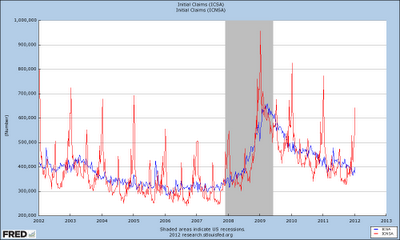 I wonder how many financial models out there reduce the weight of this data (and other series) when they are less accurate?
Here's the two data series on a year over year basis.  While initial claims are still declining the rate of decline appears to have leveled off. 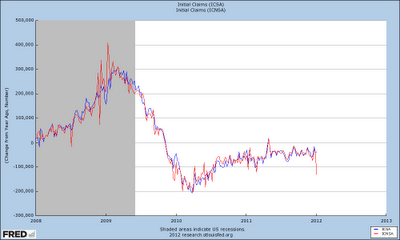 Source: Federal Reserve
Posted by Greg Merrill at 11:31 AM