Obama shuts down Keystone pipeline. The oil must flow!

It appears the Obama administration will block approval of the Keystone pipeline.

Your political leanings aside, this will not stop 'dirty oil sands' oil from getting out. I was going to work up a nice post about how Canada can ship the oil east or west but NPR beat me to it:

Philip Verleger, an economist who specializes in oil markets, says even if environmentalists convince Obama to block the Keystone XL pipeline, it won't stop the growth of production in the Canadian oil sands.
"With prices around a hundred dollars a barrel globally, that oil is going to make it to the market somehow," Verleger says. "The development may be slowed for a year or two. But one can move the oil west on the existing Kinder Morgan pipeline. They could expand pipelines east. Those pipelines already exist, and they can be expanded."
In fact, Enbridge, a Canadian energy company, recently asked Canadian regulators for permission to reverse the direction of one of its pipelines in Ontario, which many see as the first step to move more Canadian oil to the American East Coast — and relieve some of the Canadian oil glut in the upper Midwest.

Not only is the oil going to flow east but the article mentions Kinder Morgan planning to increase the flow westward to British Columbia and then down to the Pacific Northwest and out to Asia as well.


But demand is the key, say most economists. If you can get American drivers to buy less gas — by raising fuel efficiency standards, as the Obama administration recently did — then, they say, you stand a much better chance of slowing production in the oil sands.

Sorry but these are economists? American drivers are just one user of energy, don't forget all of Asia, India, South America, etc.

Energy used per unit of GDP has been declining in America since the 1920's. For nearly a century America has become more efficient at extracting more value out of each barrel/btu/pound of energy and the trend is to greater and greater efficiency.
Furthermore oil is not the only form of energy we have available in America.  Through new techniques the amount of natural gas in America is at all time highs and current prices are extremely low and production continues to rise. From Sober Look 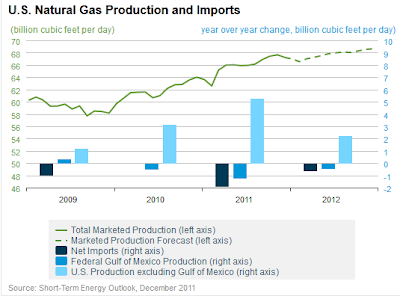 But I digress from the Keystone pipeline.  Obama may feel the need to stop this project for political purposes but all he will succeed in doing is building more pipelines in Canada going east and west and sending that oil to Asia.   Would it not be better to have the cheaper oil captive in America and depressing our prices relative to the rest of the world? Believe it or not but oil has been cheaper in America than the rest of the world for nearly a year, and some of that is due to the increased production up north in Canada.
For those of you concerned about the risk of the Keystone pipeline, there are already skads of them all over America