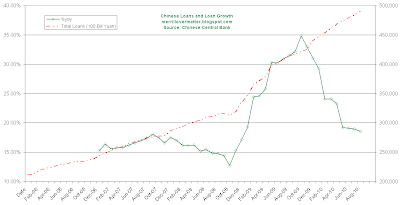 An odd way to start a post but as mentioned in my previous entry it is hard to know how much lending is truly going on in China these days.  The official data shows a decline in the rate of growth in lending and the government appears to be reigning in credit growth by raising reserve ratios.

This does not tell the entire story. There is a boatload of off balance sheet lending but there are no 'official' numbers for that.
The WSJ (Sept 28,2010 ) recently commented:


A report from Standard Chartered economist Stephen Green estimates that by the end of August between 2 trillion yuan and 3 trillion yuan worth of loans (the banks don’t formally disclose the amounts) were moved off balance sheets–and outside the PBOC’s formal loan data–in this way. Over the same period, PBOC data showed the banks lending out 5.6 trillion yuan, suggesting the banking system has already passed the central bank’s 2010 target for new credit creation. It also means that the tightening signaled by the loan quota never happened.