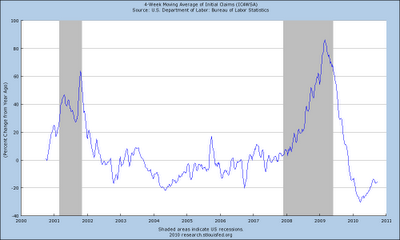 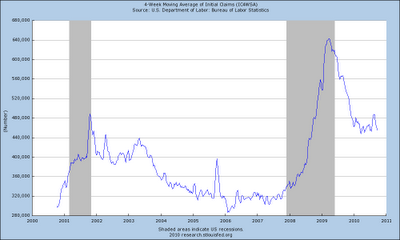 Looking at the year over year percent change in initial unemployement claims all appears well. The year over year number is negative meaning fewer people are getting laid off each week.
There is a problem with this prognosis however and you can see it looking at the absolute numbers in the second graph. In chart two initial unemployment claims have remained quite stubborn for 2010, refusing to drop below the ~440k number for the entire year.   In a couple months if unemployment claims don't start falling our year over year metric will flatten out.  Right now the employement situation is treading water and this meshes well with the general sluggish feel to the economy.
Right now this economic indicator is flashing Yellow.
Posted by Greg Merrill at 6:45 AM