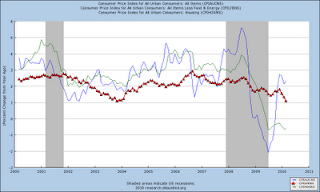 Inflation numbers were just released and continue to show the slow slide downwards in core CPI numbers.    I modified the chart to highlight core CPI.  As you can see it is still trending downwards along with the housing subcomponent.

Core CPI touched the 1% yoy level in 2004.  Considering the direction of core CPI we may penetrate that lower level soon(tm)

Housing CPI is still deflating and I don't see that changing anytime soon.

While headline CPI is still higher than core I don't foresee it rising too much more without putting a serious dent in the economy.  $150 oil helped knock the economy over last time and if oil prices continue to rise it will start to crimp the economy again.
Posted by Greg Merrill at 6:15 AM