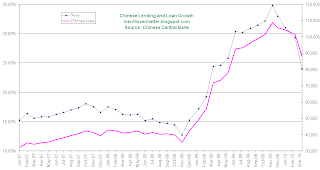 China lending continues to slow down after the dramatic increase beginning December 2008.  Chinese banks take lending orders from the Government so this is not a suprise to the powers that be in the Middle Kingdom.

Will the lending slowdown be enough to tamp down on rising property prices?  Or will they raise interest or reserve rates?  Inflation and growth in China are on the hot side right now so they may be forced to tamp on the brakes a little harder than just slowing lending.

Email ThisBlogThis!Share to TwitterShare to FacebookShare to Pinterest
Labels: china