The Swiss choose inflation, but the Chinese do not?

The Swiss central bank recently announced it would print any amount of francs required to maintain a peg of 1.20 Swiss francs to one euro.  The response was... massive 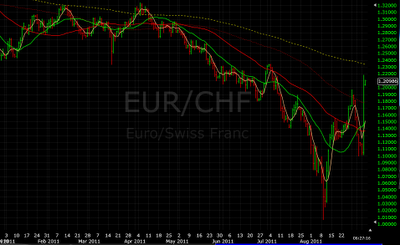 Euro / Swiss Franc
A multi percent move in currency markets is exceedingly rare. I'm not going to spill many electrons going over why the Swiss decided it was time to fix their currency as it has been a hot topic over the last 48 hours.  The WSJ and Economist have already written about it at length.
So why bring up the topic? Because the Chinese have been doing it for years and the dots need to be connected.  I recently commented on the threat of China 'dumping' US Treasuries and how this was not the problem everyone thought it would be.
In both the Swiss and Chinese case you have a country forcibly keeping their currency away from the market clearing price for differing reasons; the Swiss exporters are getting killed while the Chinese desire to keep their workshops fully staffed by forcibly underpricing their currency.
Whatever the reason the result will be the same -- an explosion of  domestic currency and loan demand eventually forcing up demand and inflation.  The WSJ's title on the Franc peg is The Swiss Choose Inflation  Why does one not think the same will happen in China? Chovanec has highlighted the constant struggle to contain inflation in China from both a massive increase in lending and an artificially underpriced currency.
In both cases the Swiss Franc and the Chinese Yuan will eventually find their market clearing prices regardless of central bank manipulation, either by currency price appreciation or by domestic inflation.