Something to watch in the new year 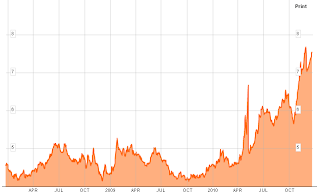 The year is wrapping up and the US stock market continues to grind higher in a Christmas rally. While the US is in a much calmer state as compared to a year ago, not all is well across the pond in Europe.

The fiscal crisis in the PIIGS of Europe (Portugal, Ireland, Italy, Greece, Spain) has not been 'fixed' in my opinion and will most likely move up to the headlines in America very shortly.

Here you can see a chart of the PIIGS bond yields  (Bloomberg) and they are not going in the right direction. The spike and fall in May 2010 was due to Greek financial difficulties and the spike in November was from Ireland. Note how much faster the fall in yields after the Ireland event has been retraced as compared to the Greek event.

As this chart shows the absolute yields and not the relative 'risk' of the PIIGS regions looking at the combined CDS for the PIIGS (Bloomberg) provides a clearer view of perceived risk.  It too is almost at new highs and could very well exceed previous peaks before the new year.    I suggest you keep an eye on both of these indicators and if you see them shooting higher you will most likely see weakness in the equity markets as well.
Posted by Greg Merrill at 9:54 AM