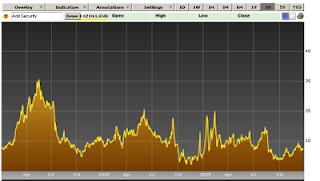 It has been a while since I posted regarding inventory levels of oil and oil products.  Here's an update:  Inventory levels have fallen from their highs earlier this year but are still elevated.  Refining margins still stink and a signficant number of tankers in the world are being used as seaborne storage playing the contango trade.

Like a lot of other commodities, oil prices are showing an expectation of further worldwide growth while inventory levels do not yet show such growth.  As the markets quite often attempt to predict the near term future, if this growth does not occur prices may correct to the downside rather quickly.  Of course the Iranian / Israeli situation my heat up and toss all economic factors out the window. 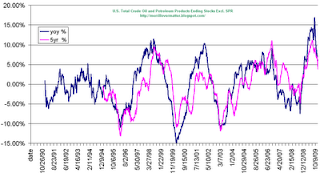 Even with the recent drawdown in inventory they are still higher than last year at this time.   It is of course unknown if the recent dramatic decline will continue, but considering the cold weather in America it is very possible.


A 26-mile-long line of idled oil tankers, enough to blockade the English Channel, may signal a 25 percent slump in freight rates next year.

Traders booked a record number of ships for storage this year, seeking to profit from longer-dated energy futures trading at a premium to contracts for immediate delivery . . . 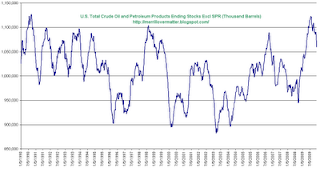 The storage trade is profitable so long as the spread between energy contracts exceeds ship rental, insurance and financing costs. A year ago, the spread between the first and sixth Brent crude-oil contracts traded on the London-based ICE Futures Europe exchange was 23 percent. Now, it’s 4 percent. . . .