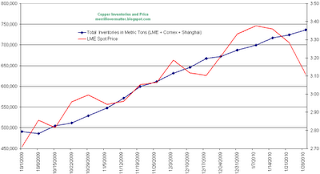 (edit 03/09/11) I have come out with a new article updating my bearish points on Copper
http://merrillovermatter.blogspot.com/2011/03/this-is-not-copper-you-are-looking-for.html

As I have mentioned before, copper inventory fundamentals support neither the current price nor the medium term price momentum.
In this somewhat longer post I'll lay out the case of how copper's fate will be decided within the next 90 days.

Inventories
The first chart shows recent inventory numbers for copper.  Since the 4th quarter of 2009 inventories have steadily risen with only one week of net declines. During that time inventories have consistently climbed at an average of at least 1,600 metric tons a day.

Looking back, inventories peaked at ~ 548,000 tons at the LME during the height of the financial panic in February 2009.  As of Friday, Jan 29, 2010 541,050 tons were sitting in the LME warehouses.  Throughout the world total copper inventories have surpassed their 2009 peak. 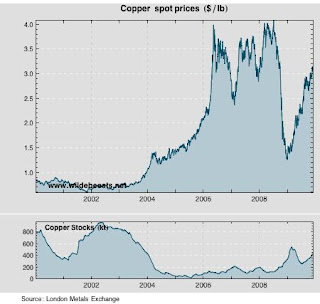 Longer term whenever copper inventories got up to the levels we are seeing today copper prices were usually in the sub $1 dollar range versus the 3.00+ price we are seeing right now.  (ht Wildebeests)

Technicals
Copper prices have dropped since the beginning of the year and has recently touched the 100 day moving average line.  Unless there is a massive upsurge in the price of copper over the next few days it is likely the 20 day moving average will cross over the 50.  I am hoping for a good solid bounce off this correction to initiate some short positions.

Seasonally copper is strongest during the first quarter of the year.  I'm speculating this is due to industrial concerns ordering copper in anticipation of the needs for the coming year.  (ht Spectrum Commodities)   If copper inventories continue to build throughout the first quarter 2010, when the seasonal boost ends we could see a very nasty fall in the price of copper.

Supply
As I have mentioned in previous posts all major copper mines appear to be up and running with no strikes or work stoppages.  Only one BHP mine in Australia is running at reduced capacity and it is scheduled to return to full capacity by March 31,2010 (source)
Demand
Even the International Copper Study Group shows excess supply and low demand.
http://www.icsg.org/images/stories/pdfs/presrels_2010_01.pdf

Re read that quote.  Copper usage increased by 43% in China but declined dramatically in the industrialized world.  If China had not gone on its lending bender copper usage would be in the toilet.  Even with the dramatic demand increase in China copper inventories still went up.

Previous posts here have revealed my opinion of the bubble forming in China.  Tightening monetary conditions in China will not help short term copper demand.

The counter argument
I am watching copper inventories on a daily basis now waiting for an entry point to initiate my short positions.  If copper inventories suddenly started going down instead of almost daily marching higher I would have to reconsider this thesis of a coming copper collapse.  I do not consider current monetary policy by any of the major powers stimulative enough to counteract the current inventory overhang from  either a demand creation or  montary inflation perspective.

Weapon of Choice
So how do you trade this?  For long only accounts you can try BOS.  It is an ETN which tracks the daily inverse price of copper, aluminum, and zinc.  Considering the high correlations of the three metals and the similar inventory situations it may be the best long way to trade this. There are some double inverse material etf's out there but I try to avoid the 2x leveraged etfs.  The decay rate is too dramatic and chews into your returns too quickly.

If you can / are willing to short there are multiple ways to play this.  Shorting FCX, PCU, TCK are some of the obvious methods, but shorting the country etfs of Australia (EWA), Chile (ECH), and Peru (EPU) would provide strong materials stock exposure.  If commodity prices tank all three countries will experience severe financial distress.

Please look at http://www.debtdeflation.com/blogs/  for some data on how Australia's debt loads are setting it up for a financial crisis similiar to what America just experienced.  Only the ravenous demand for raw materials by China kept it from experiencing a severe decline.  If commodity prices drop Australia is toast.

I have not completed all of my studies on any of the companies or countries enough to recommend you short them.  I am merely providing them as some ideas for further study by you.

Disclosure: As I don't know your financial situation, propensity for risk, tax situation, liquidity needs, or anything else about your financial situation this strategy may or may not be suitable for you.  I am laying out an aggressive strategy that can backfire if what I foresee does not come about.  Don't come crying to me if it doesn't work out. If it does, just give me credit and 2 and 20 :)   I am currently neither long nor short any of the securities mentioned above but intend to purchase or short some or all of them in the near future.

http://seekingalpha.com/article/185619-base-metals-correction-start-of-a-crash-or-a-bear-trap?source=commenter  -- He has several good charts on how the commercial traders are also very short at this time.

(edit 03/09/11) I have come out with a new article updating my bearish points on Copper
http://merrillovermatter.blogspot.com/2011/03/this-is-not-copper-you-are-looking-for.html
Posted by Greg Merrill at 7:15 AM