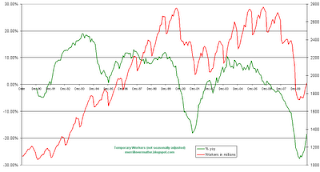 Temporary workers are the first to be fired and hired by companies as they attempt to balance demands and costs.  As you can see temporary worker employment is very seasonal, usually peaking around October and quickly falling to a seasonal low around January.

The usual 'spike' in temporary workers did not happen last year and the dropoff in temporary workers this recession is much larger than in 2000-2001.  As such year over year data will be less predictive until we settle into a new normal but on a longer term basis this data set is a good way to sense the pulse of corporate hiring and firing.  How many temporary workers are around in the nadir of 2010 employment sometime in January / February will be the next time we can start to tease out any real information.  I'll keep you informed.
Posted by Greg Merrill at 12:15 PM